This post was written in partnership with and sponsored by Vivian’s Live Again. As always, all opinions are my own. Thanks for supporting the companies that support Flippin’ Delicious ™.

Ever since I saw a cinnamon swirl quick bread recipe I have been dying to make a gluten free (and now dairy free version.)

(Be sure to check out the yeast-raised gluten free cinnamon bread I made, also using Vivian’s Live Again’s muffin mix.)

With it being the season of #pumpkineverything, and me whole-heartedly embracing it, I knew now was the time to make it happen!

I’m a busy person, just as you probably are. Whenever there is an easier way to get the same results I like to pick that option.

It gives me more time to play with my kids and clean the house.

I definitely don’t stay on top of all of the things that I “should” do. It is an impossible goal! But I do my best. 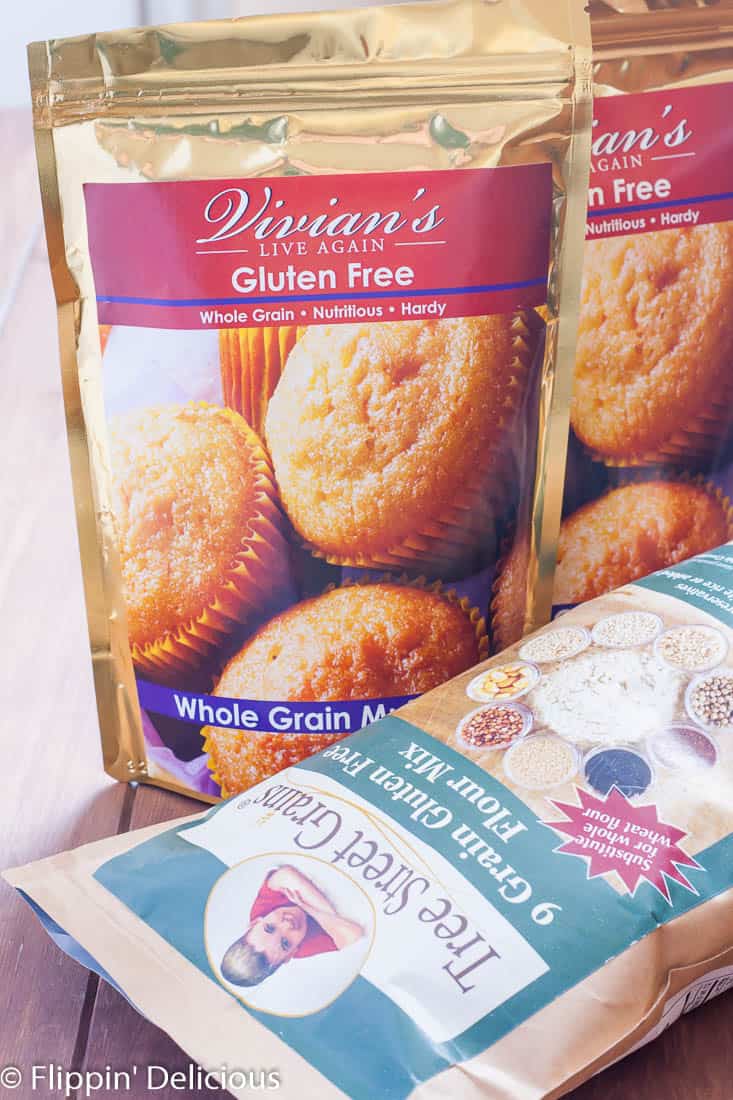 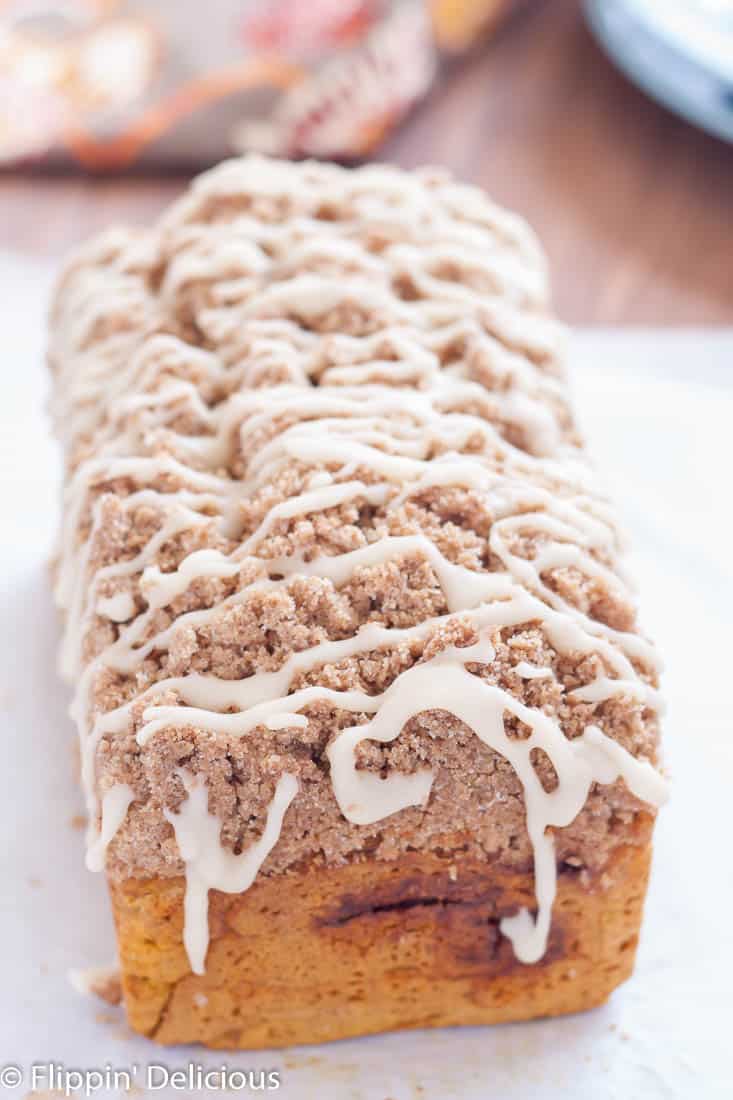 I used the Gluten Free Whole Grain Muffin Mix, adjusting the directions on the back of the box to add some pureed pumpkin, some pumpkin pie spices, and a dash of good vanilla.

Then I dressed it up (because I saved so much time using a mix for the batter 😉 ) with a cinnamon sugar swirl AND cinnamon streusel AND a vanilla icing drizzle.

(If you are an icing fan like me, you’ll probably also love my friend Chrystal’s gluten free cinnamon roll cake. It is so easy to make, perfect for brunch. Make it with my gluten free pumpkin cinnamon bread for double the cinnamon-swirled goodness!) 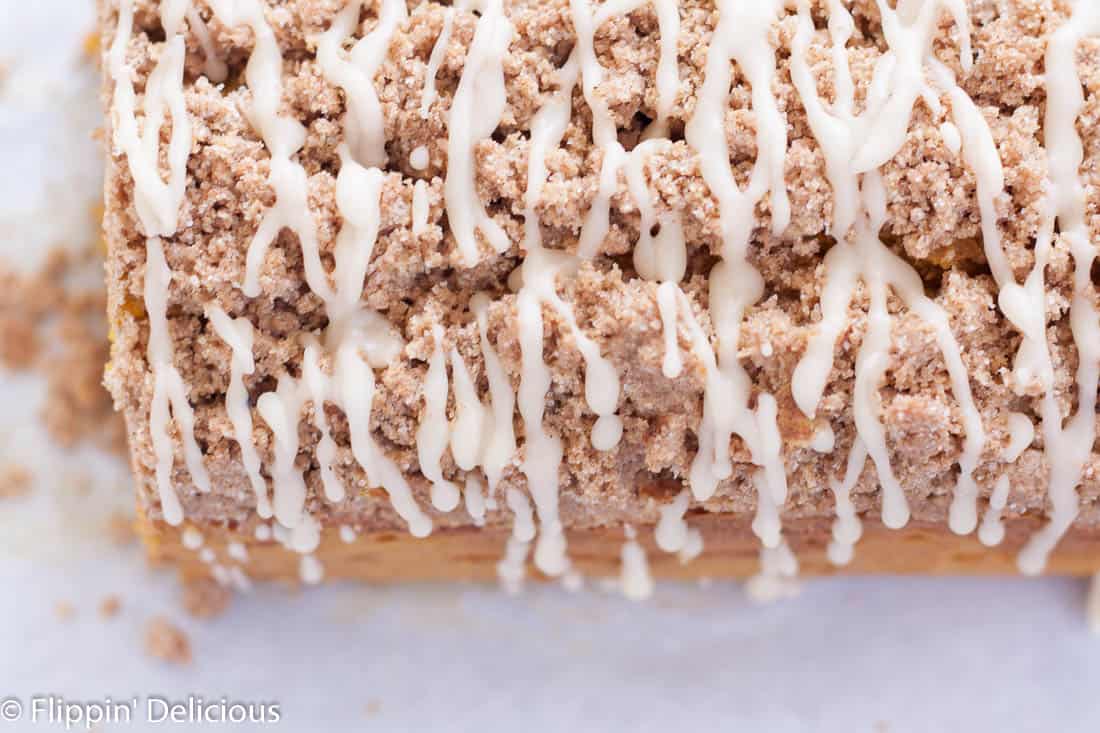 Each addition takes just a few minutes, but don’t feel obligated to do all 3! Pick your favorites. Swirl and icing. Streusel and swirl, or streusel and icing. Or just pick 1! 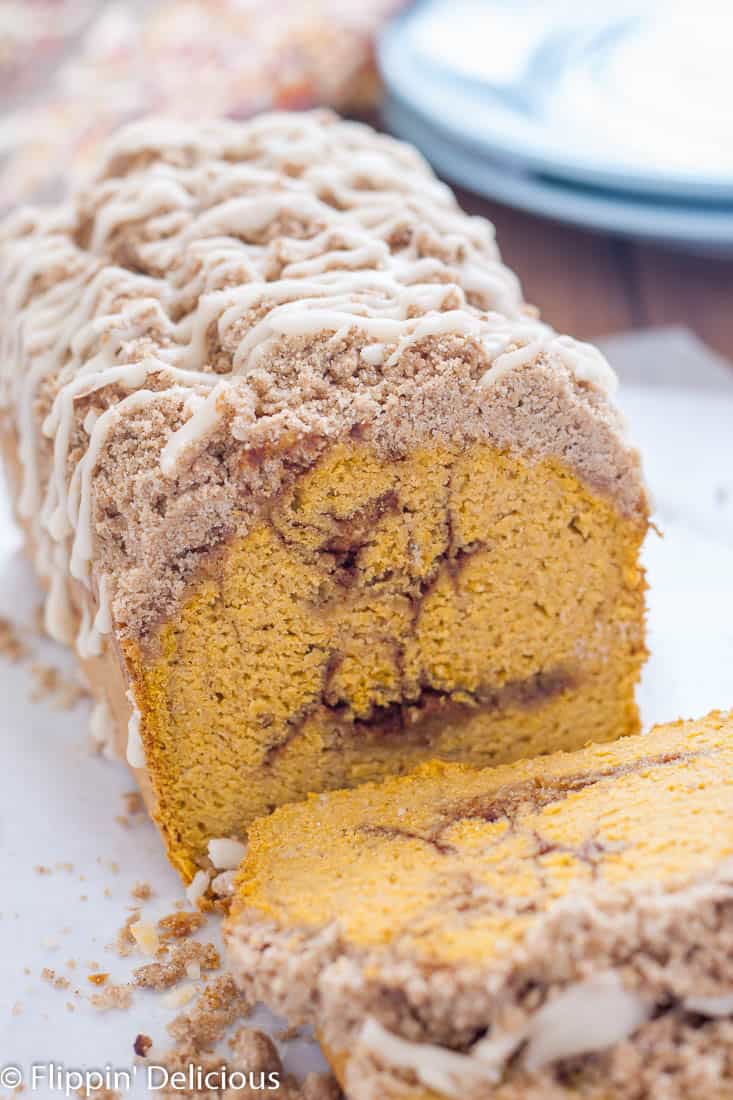 Just picking 1 or 2 would reduce the sugar in the bread too. You could also use coconut sugar for the streusel and cinnamon sugar swirl if you want. 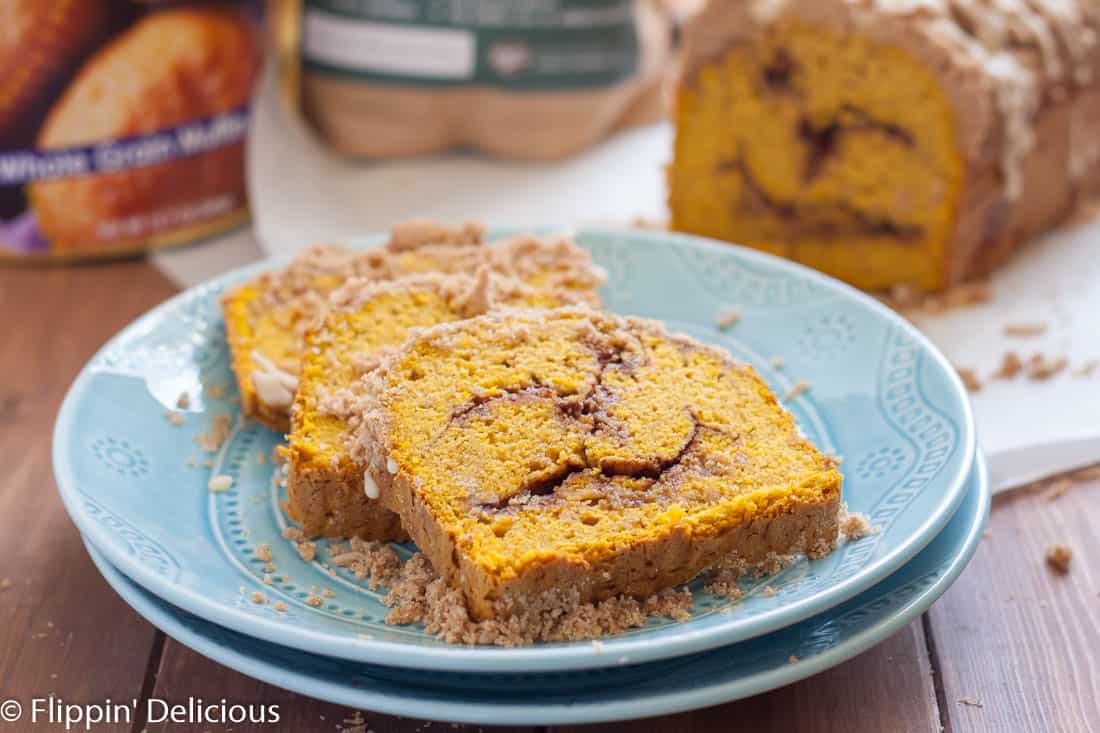 I’m partial to the streusel. It gets everywhere but every sweet and buttery bite is worth it!

Every bite is packed with whole grain nutrients so you feel good about feeding it to your family. It has no preservatives and is freshly stone ground so it is best to keep this flour cool for increased shelf life.

The next pumpkin-filled treat I want to try is this Gluten-Free Pumpkin Pie Cheesecake from Dishing Delish. Two of my favorite desserts combined into one!

For the cinnamon swirl

For the cinnamon streusel

for the pumpkin bread batter

For the cinnamon swirl

If you don't have a 9x4 loaf pan you can use a standard 9x5 loaf pan, but will probably need to decrease the bake time and will have a shorter, flatter rectangle slice instead of a square.
You can make your own Whole Grain Muffin Mix to use in this recipe, if you want. Simple whisk together:
2 cups of Tree Street Grain Flour
⅓ cup sugar
2 teaspoons of baking powder
¾ teaspoons salt

Use as directed in the recipe above or make plain muffins by adding:
2 teaspoons vanilla
1 ½ cup milk or substitute
1 egg
¼ cup oil
Bake at 400 degrees for 12-15 minutes or until a toothpick comes out clean.