Gluten Free Andes Mint Brownies have the perfect balance between a fudgy, chewy, and cakey brownie. Loaded with Andes mints and milk chocolate chips, they were dubbed by my husband, "The perfect brownie for everyone." 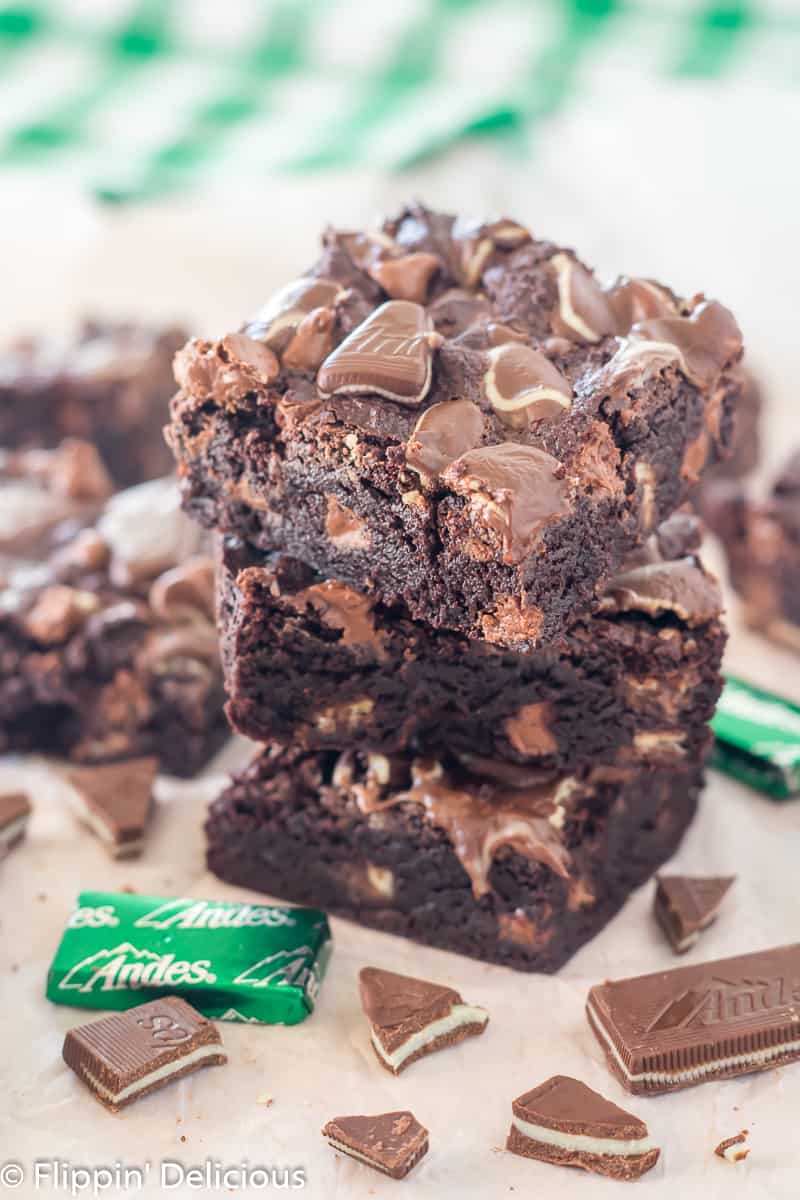 My husband loves brownies. He started making googley eyes at the bag of Andes Mints I brought home from the store and I knew just what I had to do. 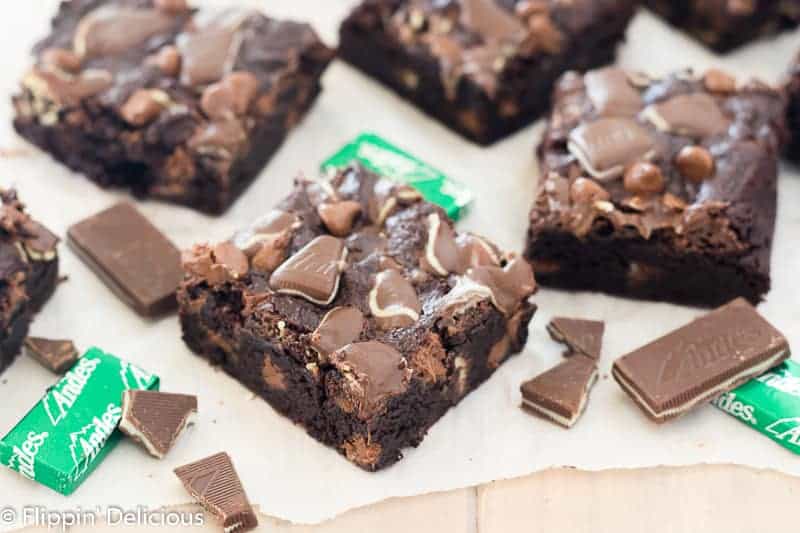 For these brownies I tweaked one of my favorite recipes for gluten free fudgy brownies. I cut back just slightly on the sugar and oil, and used a flour blend that I knew would make them a little chewier. (p.s. I used Ryze's Blue Bag, but many other gluten free flours will work, though they may not be quite as chewy.)

While that gluten free fudgy brownie recipe is one of my favorites, it isn't his cup 'o tea. He likes a chewier brownie, like my gluten free chewy dark chocolate brownies made with almond flour and melted chocolate. While I love that recipe (it is so so so good!) I like having a recipe on hand that is just a "mix and pour" brownie mix-style recipe.

With a few adjustments and tweaking to my original best gluten free brownies recipe, he dubbed these gluten free Andes mint brownies "the best brownies ever".

In a lot of ways, I agree with him.

These are the new "best brownies ever". 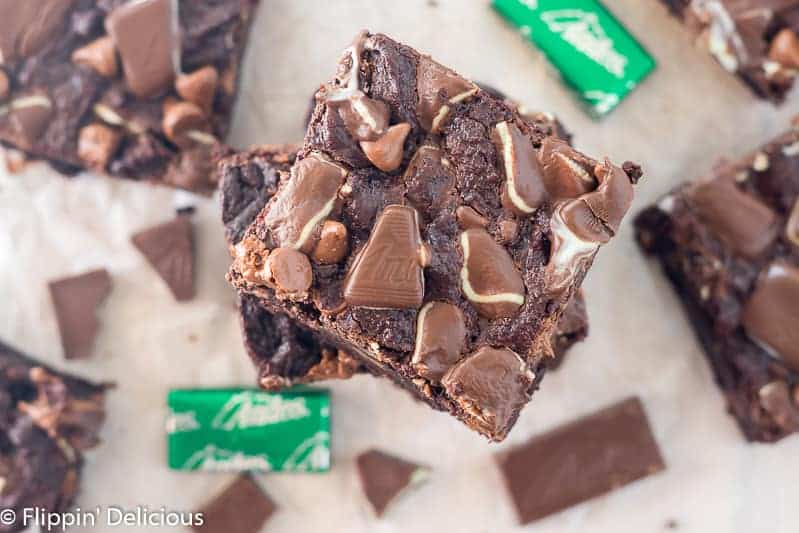 They are the perfect middle of the road, make everyone happy brownie. They satisfy the fudgy brownie lovers (like me! I'm all about that under-baked gooeyness), while still being chewy and just a little cakey. The texture will satisfy everone's brownie craving!

Of course I could never abandon my other brownie recipes, but I have a feeling these brownies will be a new staple in our house hold. With and without  the Andes on top.

Also, you can't beat the extra milk chocolate chips and Andes mints that are folded into the brownie batter and sprinkled on top.

If you are looking for a vegan brownie recipe, my friend Demeter has you covered with her Fudgy Vegan Paleo Brownies. 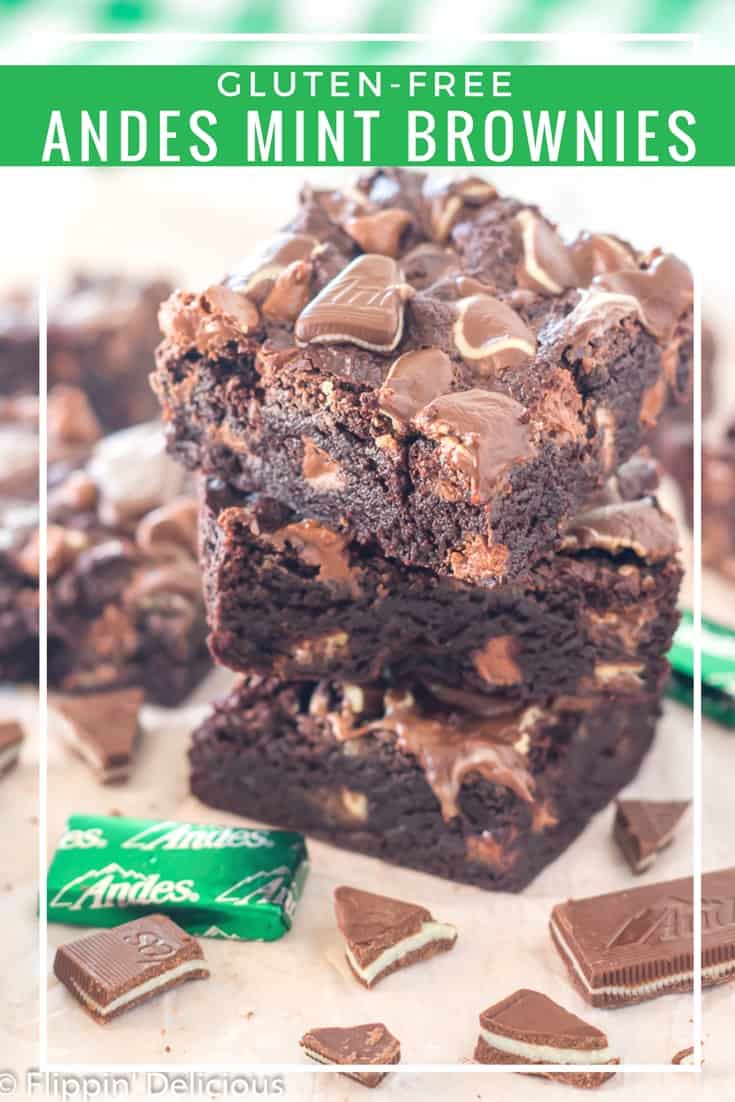