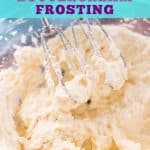 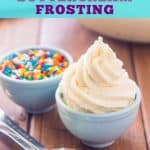 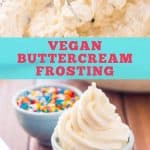 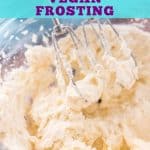 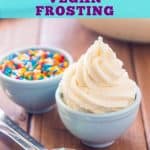 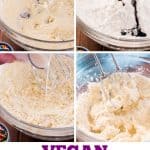 Vegan Buttercream Frosting- sweet, fluffy, and perfectly pipe-able, this dairy free buttercream frosting is my go-to for topping cookies and cakes. It makes a mean cupcake, too.

I remember the moment I nailed my easy buttercream frosting.

It was a glorious moment.

Fluffy, and hitting the perfect “sweet-but-not-too-sweet” balance, it was perfection.

Of course, then I had to figure it out all over again when our family went dairy-free.

We still keep cheese on hand, and I won’t ever give up on my cream cheese frosting, but most of our meals and most things I bake are dairy free (and of course 100% gluten free).

This is it. A perfectly pipeable vegan buttercream frosting.

I’m pretty happy with my vegan frosting. I put it on everything.

Well, not actually everything.

I’d be silly to put buttercream on, say, gluten free enchiladas. But you know what I mean.

However, I do put this vegan buttercream frosting on all my desserts.

In the mood for frosted gluten free brownies? ✔️

This vegan buttercream is the solution to all of my frosting needs.

How do you make the perfect vegan frosting?

Use half vegan butter and half palm shortening.

Frosting made entirely with vegan butter tends to be oily and greasy, in my opinion.

Buttercream made with all palm shortening tastes like shortening.

Not good. It is also too thick, and tends to look separated if you try and add any vanilla or milk.

The solution is to use half vegan butter and half palm shortening.

Making your dairy free buttercream frosting with shortening and vegan butter gives you the best of both worlds.

The resulting dairy free frosting has a good balance of texture and flavor.

My go-to vegan butter is Earth Balance or Melt.

I have use Smart Balance, and Pure Blends Plant Based Butter when I haven’t had Earth Balance or Melt on hand.

The softer vegan buttery spreads will make your frosting softer, and you will need less dairy free milk.

Whip it. Whip it real good.

I whip the palm shortening and vegan butter for a solid 5 minutes when I’m using my electric hand mixer.

You can’t easily incorporate air into your frosting after you add powdered sugar (it is too thick) so you have to do it before.

After I add the powdered sugar, I whip it again for at least 3 minutes to maximize the fluffiness.

If you have a stand mixer, you may need a little less time, depending on which stand mixer you have.

I needed 5 minutes + 3 minutes with my Bosch Compact and with my mom’s Kitchenaid Mixer.

However, with my Nutriill Artiste (or a Bosch Mixer that has the motor in the base) it whips much faster and I only need 2 or 3 minutes before adding the powdered sugar, and 1-2 minutes after.

As Ina would say.

I like to use vanilla paste in my frosting because it adds delightful vanilla specks.

Also, vanilla paste is thickened/emulsified with xanthan gum so it helps to prevent my frosting having a separated “weeping” look.

All the flavor in your frosting comes from the vanilla (since you have no butter) so it isn’t where I like to skimp.

Add your dairy free milk slowly, and a little at a time.

Vegan buttercream frosting can quickly separate if you add too much dairy free milk.

This is because there isn’t any moisture in the palm shortening.

Using half vegan butter helps with this problem, but you still want to be careful because it is less forgiving than traditional American buttercream frosting.

Add a teaspoon of milk, and then add more ½ a teaspoon at a time until your frosting is smooth and spreadable.

Be sure to add the milk after the vanilla, since that will add more moisture to your frosting.

What to do if your vegan frosting is too runny?

If you accidentally add too much milk and make your vegan frosting too runny (it happens to the best of us) and your frosting is sloppy, too loose, or weeping, try adding ¼- ½ cup more of powdered sugar.

Extra powdered sugar can sometimes help to absorb the extra liquid and save the day.

You can also try chilling your frosting, and then whipping it up again once it has firmed up.

How do I make chocolate or strawberry vegan frosting?

Only your pantry and your imagination limit the flavors of vegan frosting you can make!

(I frosted my gluten free yellow cupcakes with strawberry vegan frosting. And then added unicorn toppers and a million sprinkles, just for fun.

Can you freeze vegan frosting for later?

Yes, you can freeze your vegan frosting for later.

You can also store it in the fridge.

Place your frosting in an airtight container or freezer bag, and remove excess air if possible.

You can freeze your vegan buttercream for up to 3 months, or store in the fridge for up to a week.

To use your frozen vegan frosting, let it come to room temperature and then whip for a minute or two, until it is light and fluffy.

It may take a few hours for it to thaw to room temperature, so plan for that.

If you try to speed up the process in the microwave you are likely to melt your frosting!

Does vegan frosting set up like a normal buttercream?

Yes, my vegan frosting sets up like a normal buttercream.

It actually travels better than a frosting made with all butter because the palm shortening isn’t as temperature sensitive.

Do I need to refrigerate cake frosted with vegan buttercream?

From a food-safety perspective, you should still refrigerate anything frosted with vegan frosting.

It doesn’t have butter, but the dairy free milk and vegan butter should still be refrigerated if you are storing it long-term.

Personally, if I’m frosting something and I’ll be using it within a day or two I don’t worry about refrigerating it. I haven’t had any problems.

If you are storing long term, I suggest refrigerating or freezing anything frosted with vegan buttercream.

It all comes down to a judgement call, juggling the food safety aspect vs. the convenience and texture of keeping the vegan frosting at room temperature.

If refrigerated, it will harden and you will have to wait for it to come back to room temperature, which can take several hours.

Armed with my not-so-secret-anymore tips, make some vegan buttercream frosting!

You can easily half this recipe, or even make only a quarter batch. If you are making a smaller batch, you'll find it easier to use a handheld mixer instead of a stand mixer, since the bowl won't be as full.

My favorite vegan butters I've tried in this recipe are Earth Balance and Melt. They hold up better than vegan spreads like Smart Balance.

Any dairy-free milk you have on hand will work. I usually have coconut milk, almond milk, or flax milk on hand. If it is hot when you make your frosting, you may not need any milk at all! When I make dairy free frosting in the summer, I sometimes don't need it.

Be sure to add your vanilla extract before the milk, because the vanilla will thin the frosting out a little.

You can make more than just vanilla vegan frosting with this recipe! We've tried stirring in strawberry and raspberry jam instead of /in addition to the milk for a deliciou berry frosting. We also love making chocolate vegan buttercream!