These Gluten Free Sticky Asian Ribs are easy to make with just a few minutes of prep. Just as good (if not better) than any restaurant ribs! 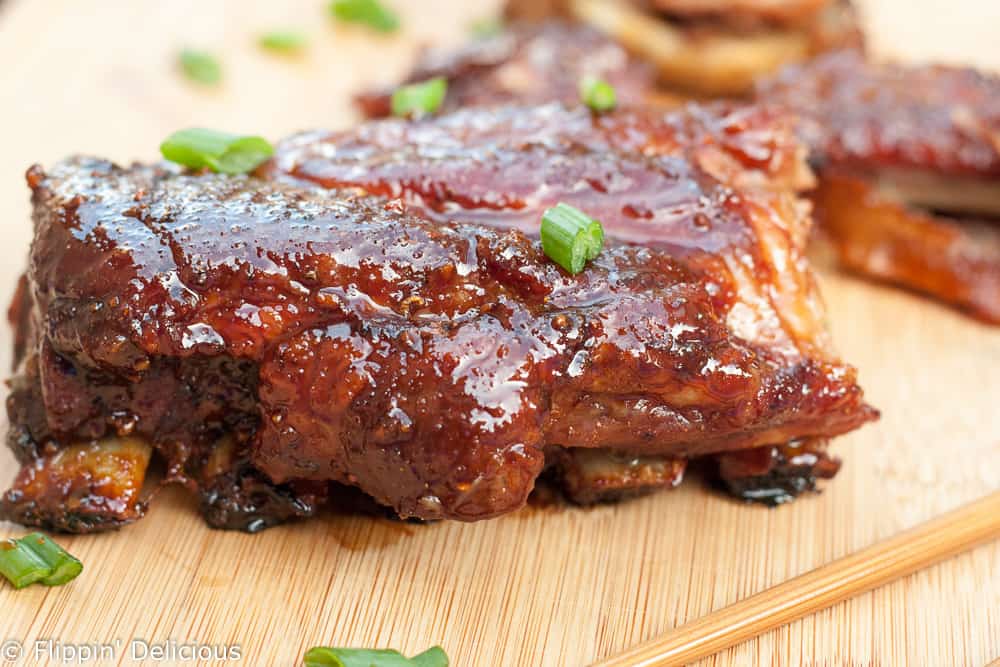 Ribs are a food that my husband introduced me to.Can you believe I had never had baby back ribs until adulthood?

The other most memorable food he introduced me to was hot wings. (On one of our very first dates we had a hot wing eating contest. He won because I was trying to not get my face too messy. I was on a date, after all.)

We went on a date to Chili’s sometime in the first year of our marriage. While we were looking over the menu my husband discovered that I had never had ribs. It was decided in that moment that we had to remedy that immediately. So we ordered some baby back ribs. 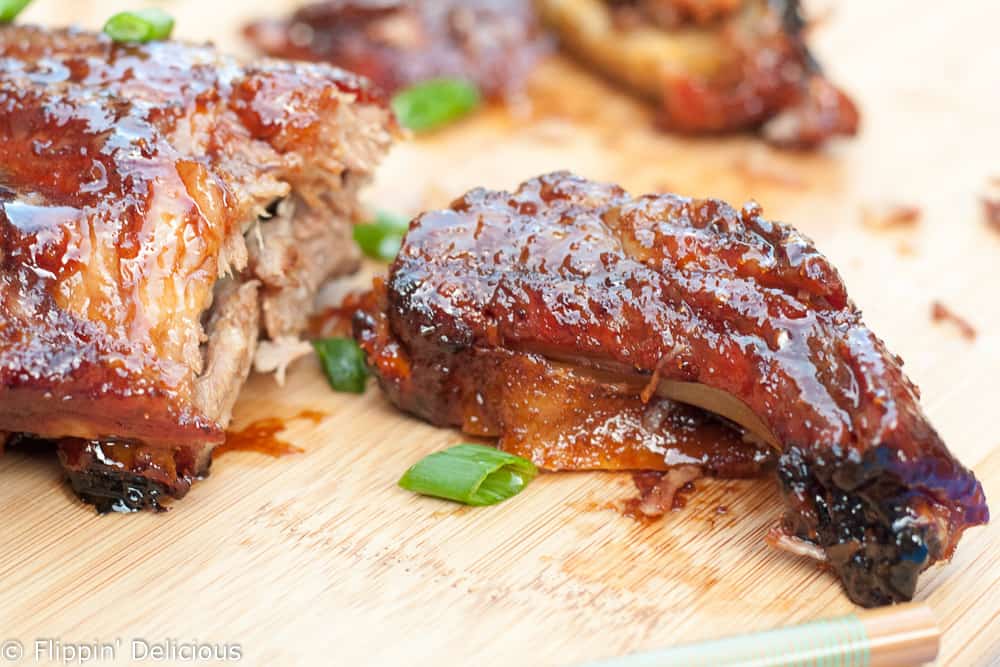 Eating smoky and tender ribs coated in a sweet and sticky barbecue sauce is quite an experience! A very messy experience. Even messier than my introduction to hot wings!

I have eaten baby back ribs many times since then, but hadn’t actually made them in my own kitchen. The last time I was I was at the grocery store I noticed that the baby back ribs were on sale and decided to make them for dinner that week.

I was surprised how easy it was to make tender, fall off the bone ribs! I think they were just as good (if not better) than any ribs that you can get in a restaurant. 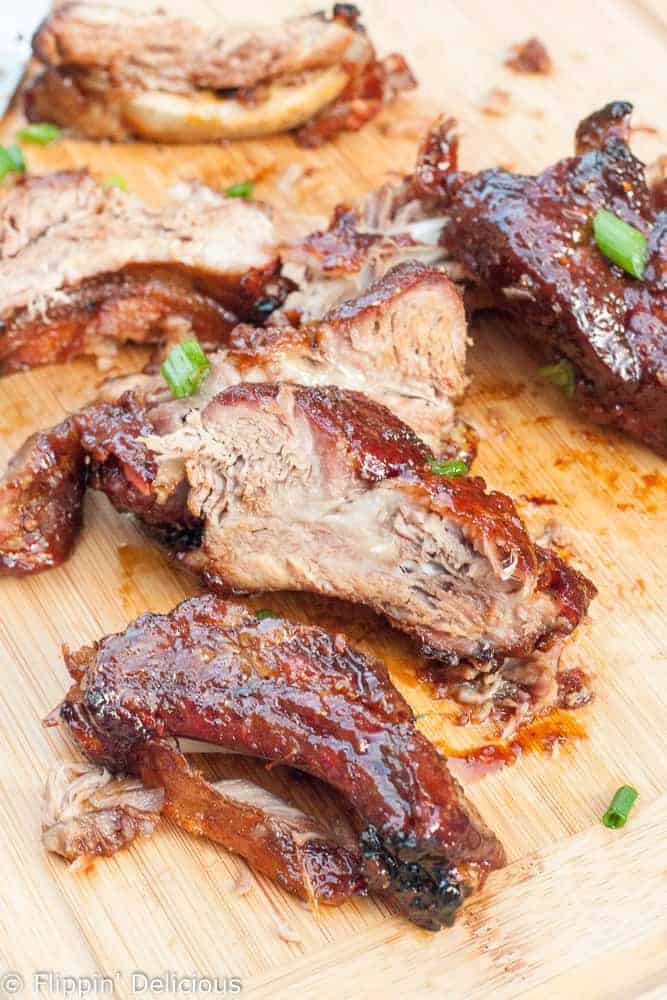 My husband’s only complaint was that I had *thought* that a half a rack would be enough for our family of 4. I was trying to be frugal and in my defence we have a picky preschooler and a toddler as members 3 and 4 in our family. I had no idea that this gluten free sticky asian ribs recipe would be such a hit! I should have bought 3x as much meat. Next time I will get at least a full rack of ribs.

The secret is to cook the ribs low and slow. Roasting them in the oven helps to get that “bark” on the outside, while keeping it super easy. Just rub your ribs down in your favorite rub (or use the easy recipe that I’ve included for a barbecue rub with an asian twist,) cook them low and slow in the oven for 4-5 hours, and then brush them down with the easy sticky asian sauce about 30 minutes before they come out of the oven.

I just LOVE the sweet and sticky sauce glazing these ribs! It is very similar to the marinade and dipping sauce for my favorite seared ahi tuna steaks. The big difference is that you simmer it in a saucepan until it is reduced and almost syrupy. That helps it to stick to the ribs when you brush the glaze over them. 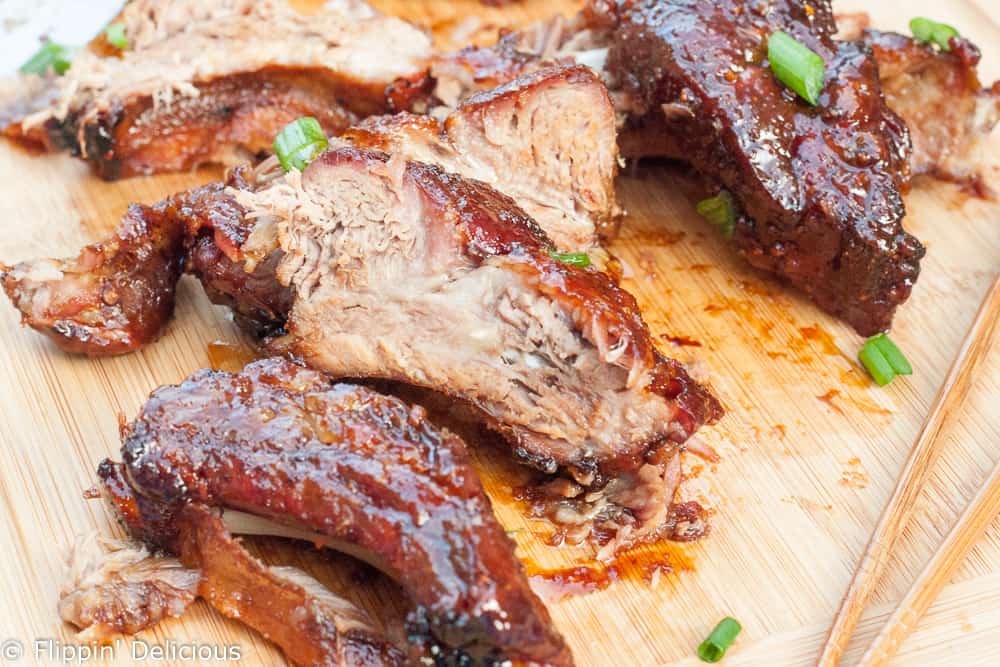 Eating gluten-free you can often order ribs at restaurants, but any sticky asian ribs wouldn’t be an option because they would be made with regular soy sauce (which has wheat in it.) So whenever you get a craving for some tender gluten free sticky asian ribs you can make them yourself!

If you are craving some more Asian flavor, you have to try my Gluten Free Bang Bang Shrimp CopyCat Recipe. My family loved them!