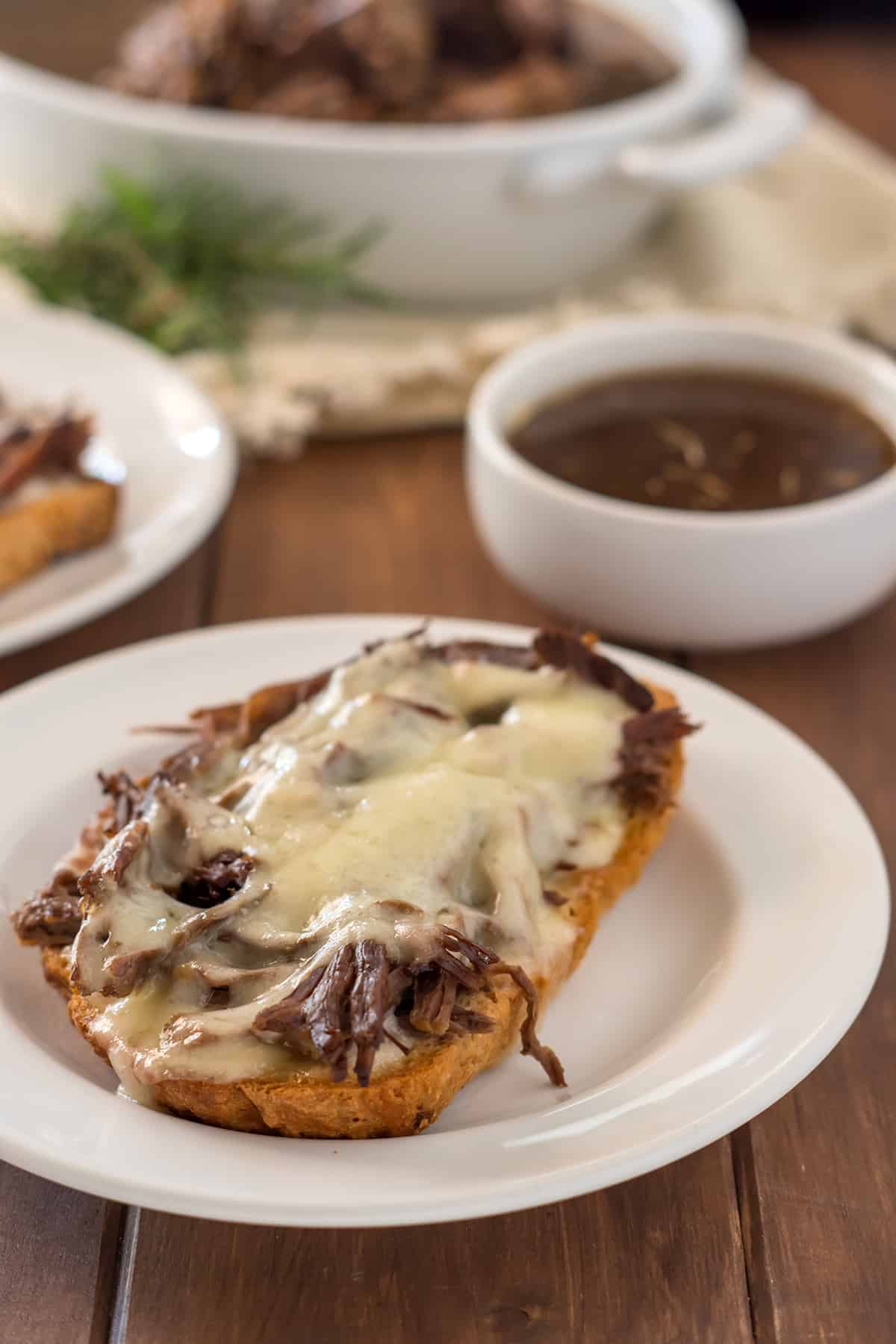 I still clearly recall the first time I had a French dip sandwich.

My first post-high school job was working at Jason’s Deli. I had never heard of dipping a sandwich in “jus” and at first it seemed really weird to me.

Over time, based on the recommendations of many others, I gave their French dip beef au jus sandwich a try and I fell in love! It was a regular on my lunch rotation while I worked there.

While I enjoyed French dip sandwiches at Jason’s deli, I never thought to make them at home. 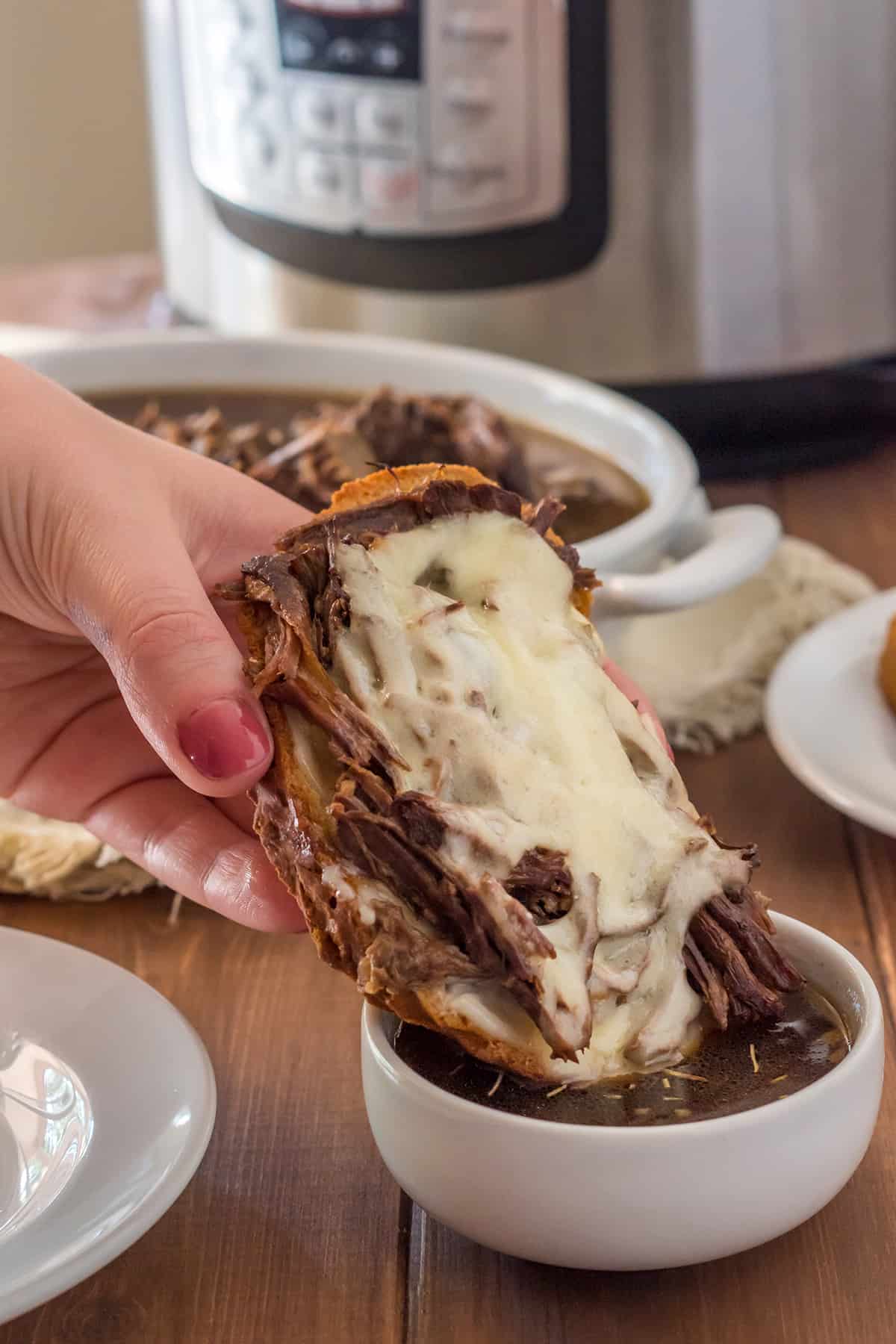 One Sunday for family dinner, my sister-in-law made gluten free French dip sandwiches. She sent me a flurry of texts and phone calls while she was at the grocery store, asking me which soy sauce I could have, and which brands of beef broth were safe.

I was so touched that she thought to make something that I could enjoy with everyone else, and was going to such effort to make sure the ingredients were safe for me.

I brought my own gluten free bread and a batch of gluten free yellow cupcakes to family dinner.

I usually get to bring dessert to family dinner, which is my favorite! If not gluten free cupcakes, I usually bring my giant gluten free chocolate chip cookies.

I placed my gluten free bread on its own baking sheet and topped it with roast beef and provolone. I ladled a small bowl of jus too, I wanted the full experience! 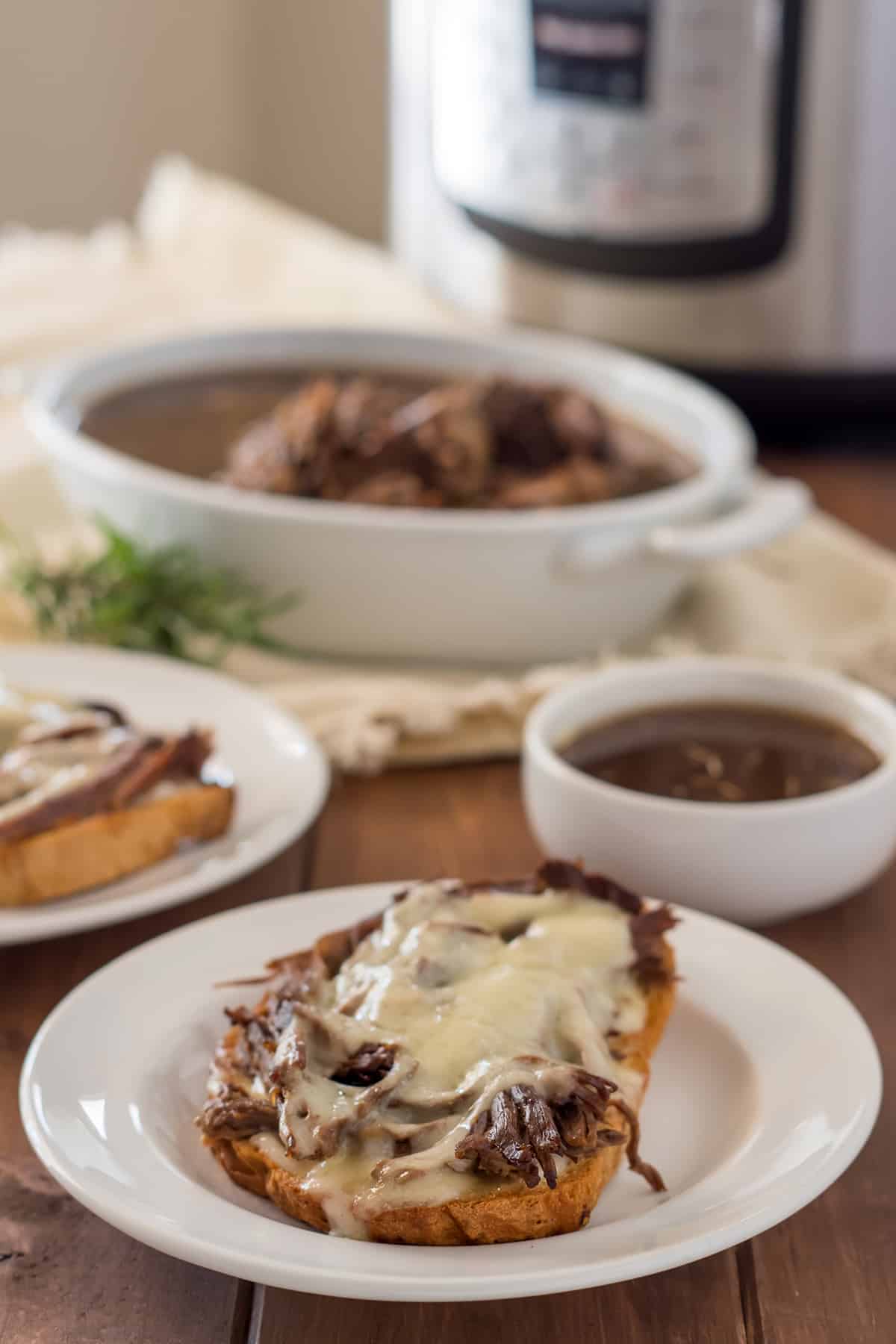 After my first bite, I fell in love. This was worlds better than anything I’d ever eaten at Jason’s deli. I asked my sister-in-law for the slow cooker French dip sandwich recipe and was surprised, and excited, to discover that it was created by one of my dear friends, Michelle from My Gluten-Free Kitchen.

If you are looking for more IP recipes using a roast, check out my dear friend Megan’s Instant Pot Chuck Roast recipe. It is sure to be a hit!

Ever since that family dinner, Instant Pot gluten free French dip sandwiches have been on our family’s dinner menu. I’ve made lots of changes over the years to make it just the way our family likes it.

The biggest change is using an Instant Pot instead of a slow cooker. 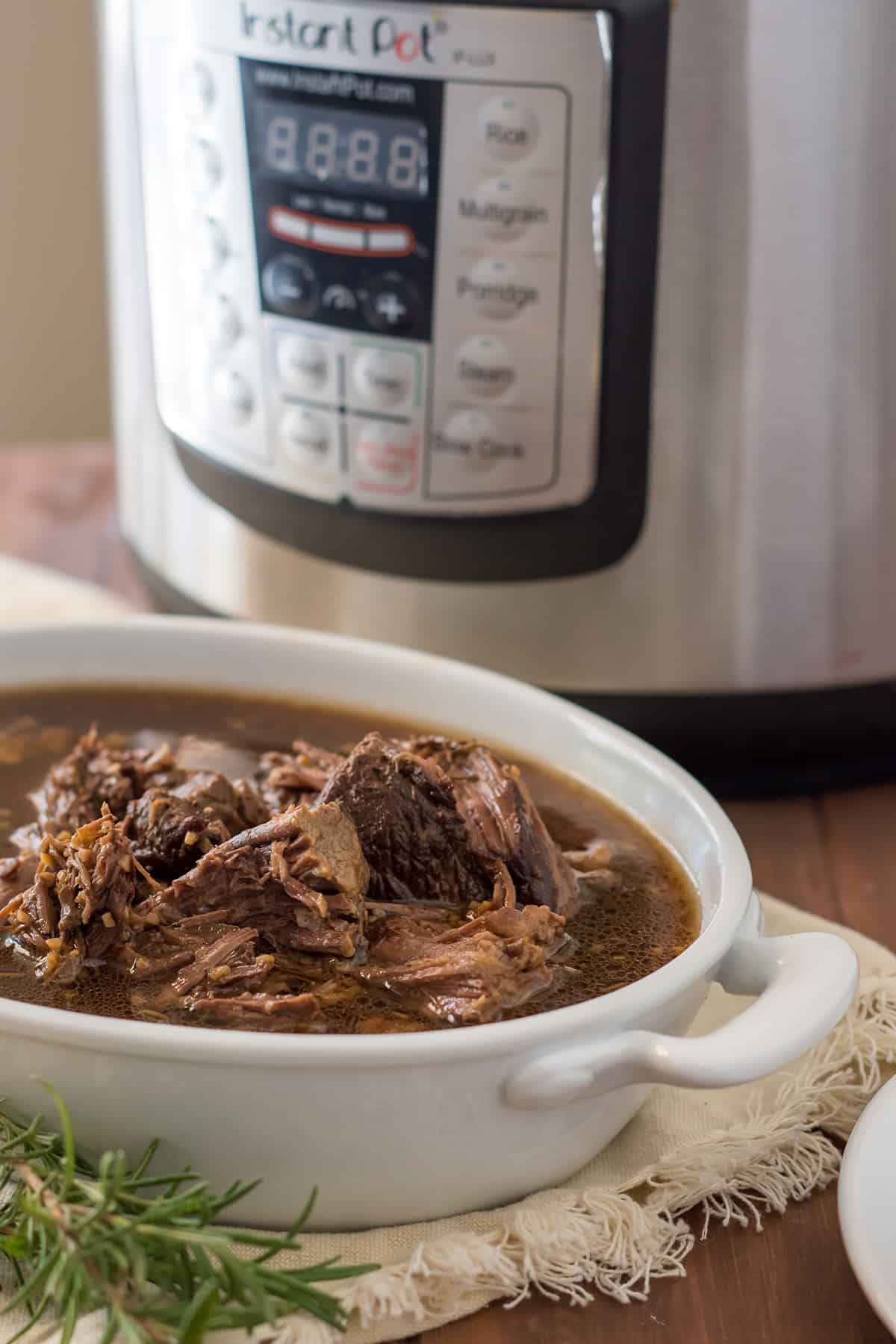 Using an Instant Pot for slow-braised or slow-cooker dishes like gluten free French dip sandwiches enables you to quickly sear the meat on the sauté setting before slow-cooking or pressuring cooking.

Searing the meat adds a lot of flavor to your final dish because it caramelizes the proteins (this is called the maillard reaction).

Using and Instant Pot also helps to prevent the “oh no! I forgot to put dinner in the slow cooker” scenario. I’ve been there so many times! With my Instant Pot, I can start dinner whenever I want to and then it will switch to the warm setting until we are ready to eat.

How is this gluten free French dip recipe special? 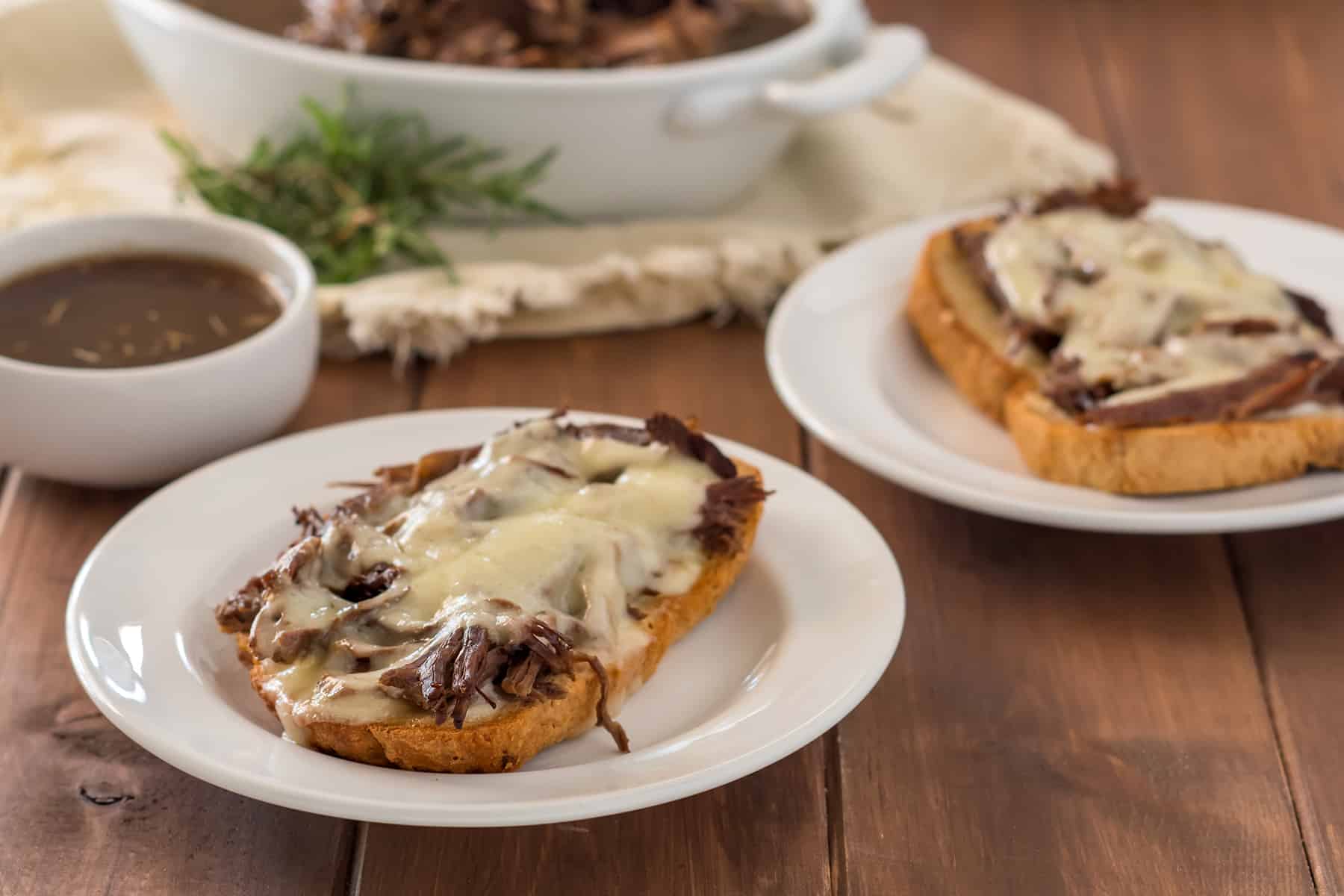