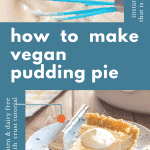 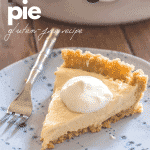 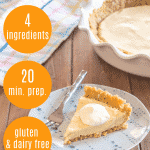 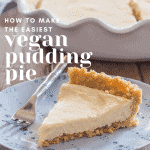 How do you make vegan pudding pie?

If you are anything like me, you used to have a favorite pudding pie recipe, and now you can’t use it.

Maybe you can’t use it because you have celiac disease and have to eat gluten-free. Or you have a dairy allergy. Or you choose a plant-based or vegan lifestyle.

whatever the reason, you miss the ease and convenience of your old favorite pudding pie recipe. And you crave it!

And no tofu, or avocados or mashed banana to be seen (unless of course, you are going for a banana cream pie.)

How do you make vegan cookie crumb pie crust?

Your favorite store-bought crust, or graham-style crust will work great for making a vegan pudding pie!

I like making my own gluten free cookie crumb crust by mixing crushed gluten free vegan cookies and mixing them with melted vegan butter, or even shortening, and pressing it into a pie dish.

I crush my cookies by placing them in a gallon-sized plastic bag and then whacking them with either a meat mallet or a rolling pin.

How much vegan butter you need will depend on the cookies you use. Some cookies need a little more and some a little less, but they always need around 2-4 tablespoons. I usually melt ¼ cup of vegan butter and then add it a little at a time until I have a sandy texture that will hold its shape when squeezed in your hand.

Using a glass makes pressing the crust out evenly in your pie pan makes it super easy. You can also press the crust out with your fingertips, but when I do I always end up with uneven spots.

How to make vegan pudding?

There are many different ways to make pudding.

I like using instant pudding mix to make my vegan pudding pie, because it is quick, easy and predictable.

However, most of the instant pudding you’ll find at your local grocery store won’t set in dairy free milk, or ill only set it you use a lot less milk which overall effects the taste and texture. I like using Vivian’s Live Again Chocolate, or Banana and Vegan Pudding Mix because

You can make vegan pudding over the stove-top but it can take longer, has to cool, and sometimes won’t set firm enough for a pie.

It is super easy to make vanilla pudding pie if you use Vivian’s Live Again’s Vanilla Pudding Mix. All you have to add is your favorite dairy free milk!

I have made gluten free chocolate pudding pie more times than I can count using Vivian’s Chocolate Pudding Mix. You can also stir some melted and cooled vegan chocolate into the vanilla pudding mix before pouring it into your crust.

One of the “secrets” in Vivian’s Live Again’s Vegan Pudding Mix is banana flour. I don’t know how or why it works, but it does. You don’t taste the banana in the vanilla pudding mix, but Vivian’s made a Banana Pudding mix which makes an incredible vegan banana cream pie.

Before pouring your pudding mix into your crust, add some sliced bananas. Then top your chilled banana pudding pie with some creamy whipped topping and more sliced bananas.

Most instant vanilla pudding mixes are not vegan, or on’t set up in vegan or plant-based milks. I use Vivian’s Live Again’s Vegan Instant Pudding Mix, because it is made to be used with dairy free milk and set up great!

what dairy free milk will work with instant pudding mix?

Most instant pudding mixes won’t set when mixed with dairy free milk, or they will only set if you use almost half as much as the directions call for (which can really skew your recipes.)

I’ve tried almond milk, cashew milk, and coconut milk with Vivian’s Instant Pudding mix, and they all have worked great. Rice milk will work too, but it has to be boiled first or it won’t set correctly.

I used some crushed sugar cookies to make my gluten free vegan cookie crumb crust. You can use any crushed cookies or graham crackers you would like. I used Melt as my vegan butter, but I've also used Earth Balance, and Country Crock Plant Butter Sticks with similar results.