This Gluten Free Vegan Chocolate Pie is no bake and free of the top 8 allergens. Finally a dairy free dream whip pie that my family can enjoy! 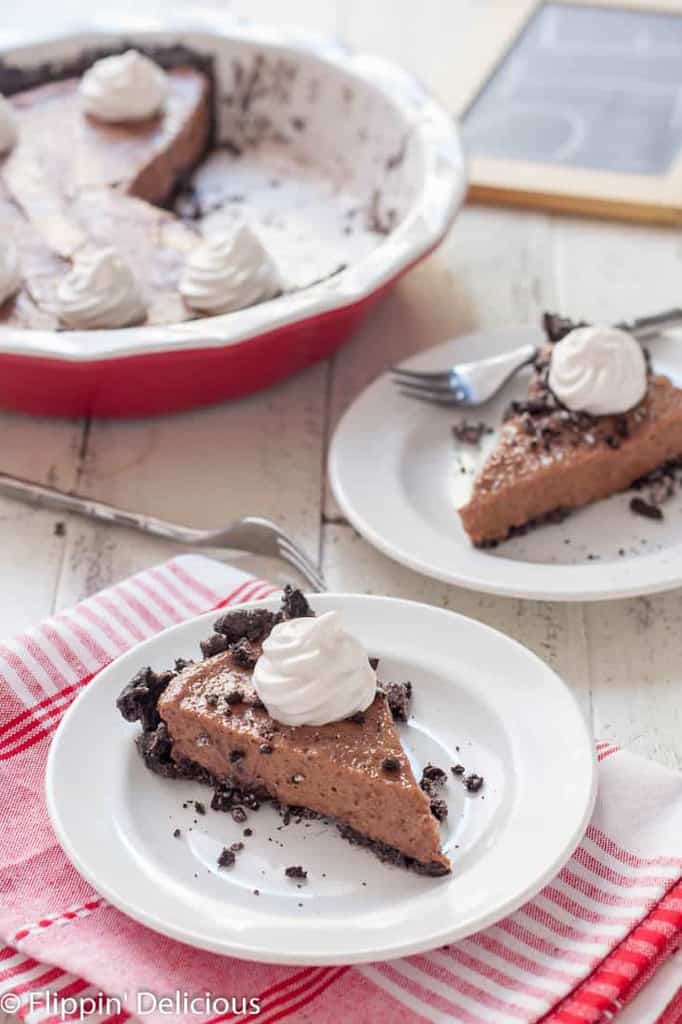 This post is sponsored by Vivian's Live Again. As always, all opinions are entirely my own. Thanks for supporting Flippin’ Delicious™ and the companies that I work with!

There are some things about my husband that I will never understand. Like his undying love of cereal and his aversion to many of my favorite desserts. He would rather eat a bowl of cereal than a slice of my gluten free red velvet cake.

When we were engaged we had a discussion about dessert and he eventually admitted that there was one dessert that he really did love (and prefered to cereal. 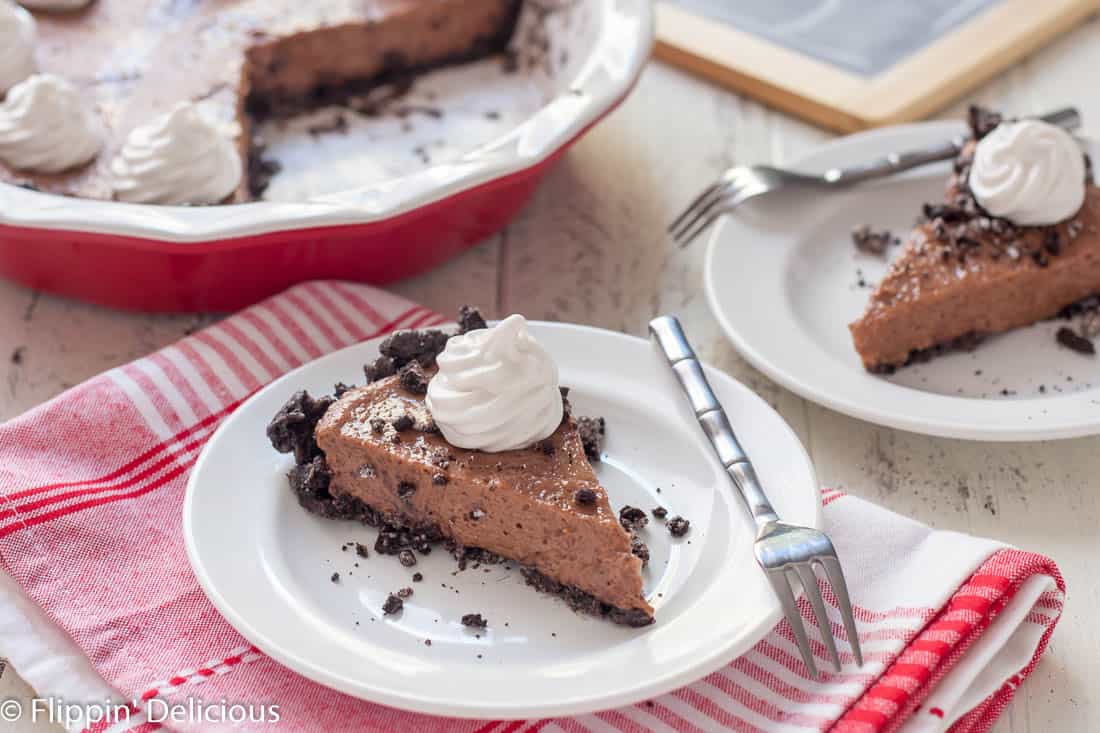 It was something that his mom had made for special occasions when he was growing up. I had never heard of dream whip pie before. So we googled it. It was basically a chocolate pudding or chocolate cream pie made with a Dream Whip packet (powdered magic that turns into whipped cream when whipped with milk) and chocolate pudding mix.

Our very first Thanksgiving after we were married I wanted to surprise him by making a dream whip pie, but using homemade pudding and fresh whipped cream. I was pregnant with our first and had been throwing up for a solid 4 months, but I stood in our tiny itsy bitsy kitchen in our tiny itsy bitsy STUDIO apartment and attempted that elusive chocolate cream pie. That one was a complete flop!

A few years later I made a pie with whipped cream and melted chocolate that my sister lovingly refers to as a "3 musketeers pie" because the filling was so rich it reminded her of the filling of a 3 musketeer bar. She could only eat a few bites!

I eventually surrendered to the classic chocolate dream whip pie as originally made by my hubby's mom. Every Thanksgiving and every birthday I would make it for him. 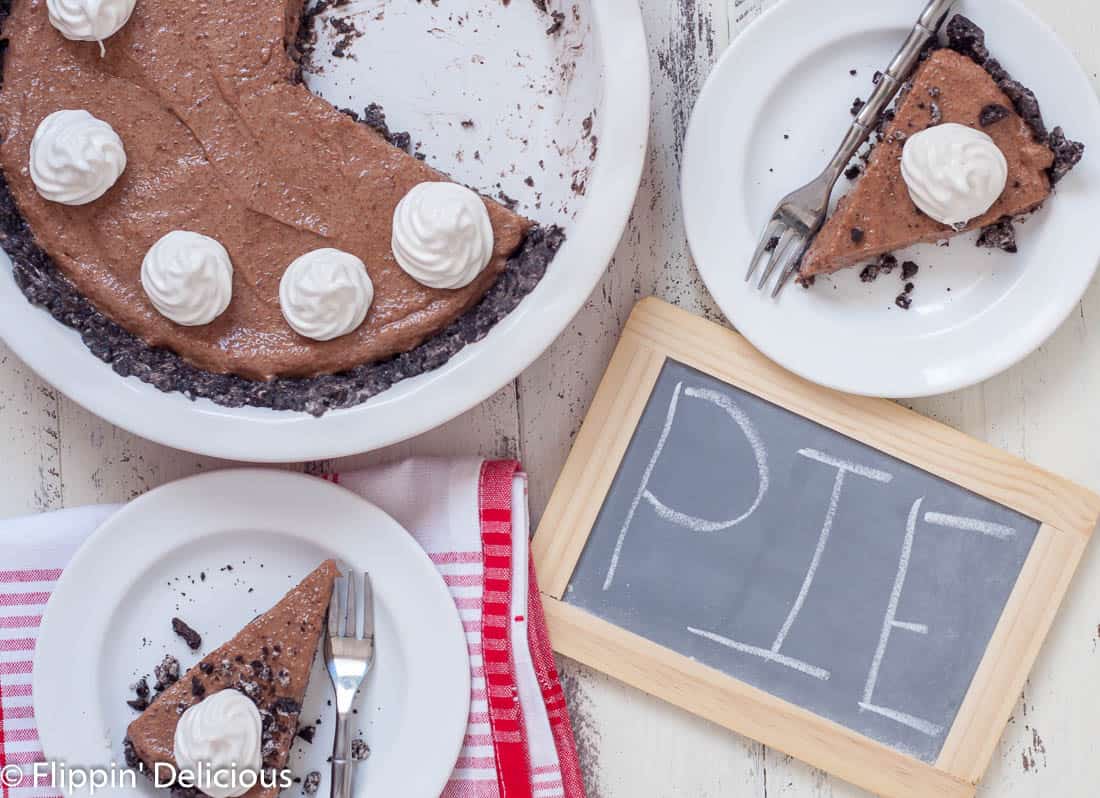 But last January we went dairy free, so a creamy gluten free chocolate cream pie made with dream whip is no longer an option.

When I first met the owner of Vivian's Live Again at Everything Food Conference this past May she gave me one of her creamy whipped topping packets to try. It is soy and dairy free, gluten free, and vegan. My first thought was to use it to re-create that chocolate dream whip pie for my hubby. I saved it for his birthday and made a beautiful creamy gluten free vegan chocolate cream pie with my girls. It was pretty darn good! A few tweaks to that recipe and I now have what I think is a dead ringer for a dream whip pie, but it is gluten-free, vegan, and free of the top 8 allergens!

I used Vivian's Live Again Creamy Whipped Topping AND Vivian's Live Again Vegan Instant Chocolate Pudding folded together in a gluten free vegan chocolate cookie crust. It was so easy! No oven required, making it perfect for the hot summer months, or for Thanksgiving when you don't have any extra room in your oven.

Vivian's Live Again also has a Vegan Vanilla Instant Pudding and a Vegan Banana Instant Pudding! How yummy would it be to use sub the banana pudding and pour it into a gluten free graham style crust and top it with sliced bananas? 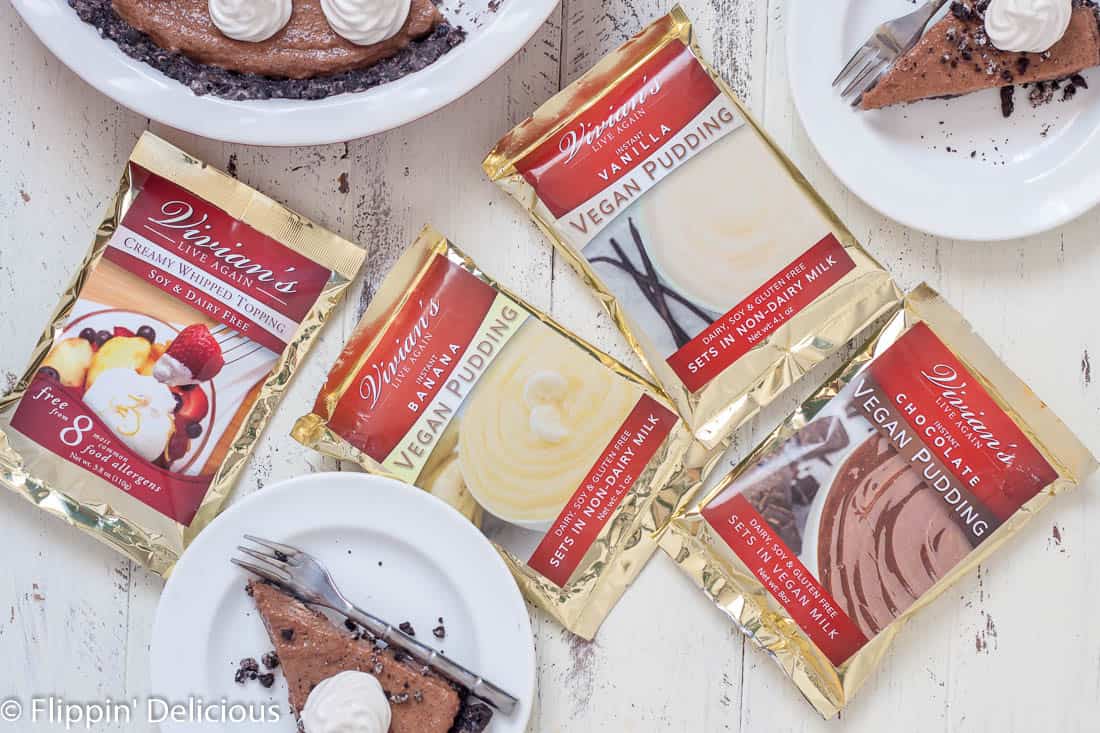 We usually go to my parents home for Thanksgiving, since they live about 20 minutes away from us. Almost all of my family eats gluten-free, so we have a 100% gluten free Thanksgiving feast complete with more gluten free pies than people (I think our record was 17 pies 2 years ago! Last year we cut it back to 15.) It is a celiac's paradise!

This year we are going to enjoy our Thanksgiving feast with my mother-in-law. She and her husband eat normally, while we have to eat gluten free and dairy free. So I am going to tuck a few creamy whipped topping and vegan pudding packets into my purse and make this gluten free vegan chocolate pie at her home that we all can eat!