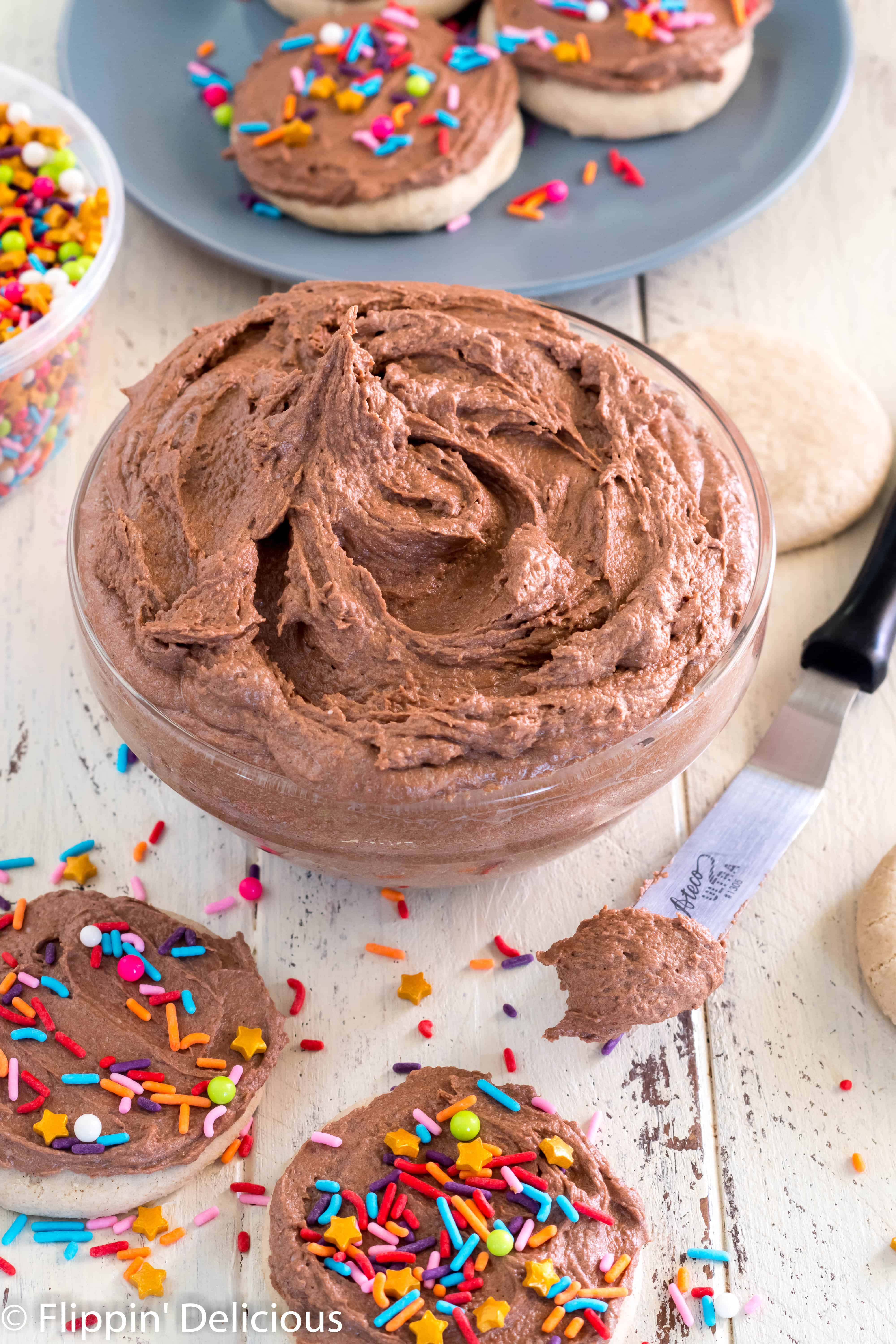 Sometimes you want more than a vanilla vegan frosting. And while my vanilla frosting is incredible (it has great reviews, check them out). I was sad you were missing out by not having an awesome vegan chocolate frosting recipe!

Spoiler: my chocolate frosting starts out exactly the same as my vegan frosting recipe. There are a few secrets to making a perfect vegan buttercream frosting. You can read more details than you'd ever want to know on in that recipe, and here is the Reader's Digest version.

What mixer do you need to make frosting? 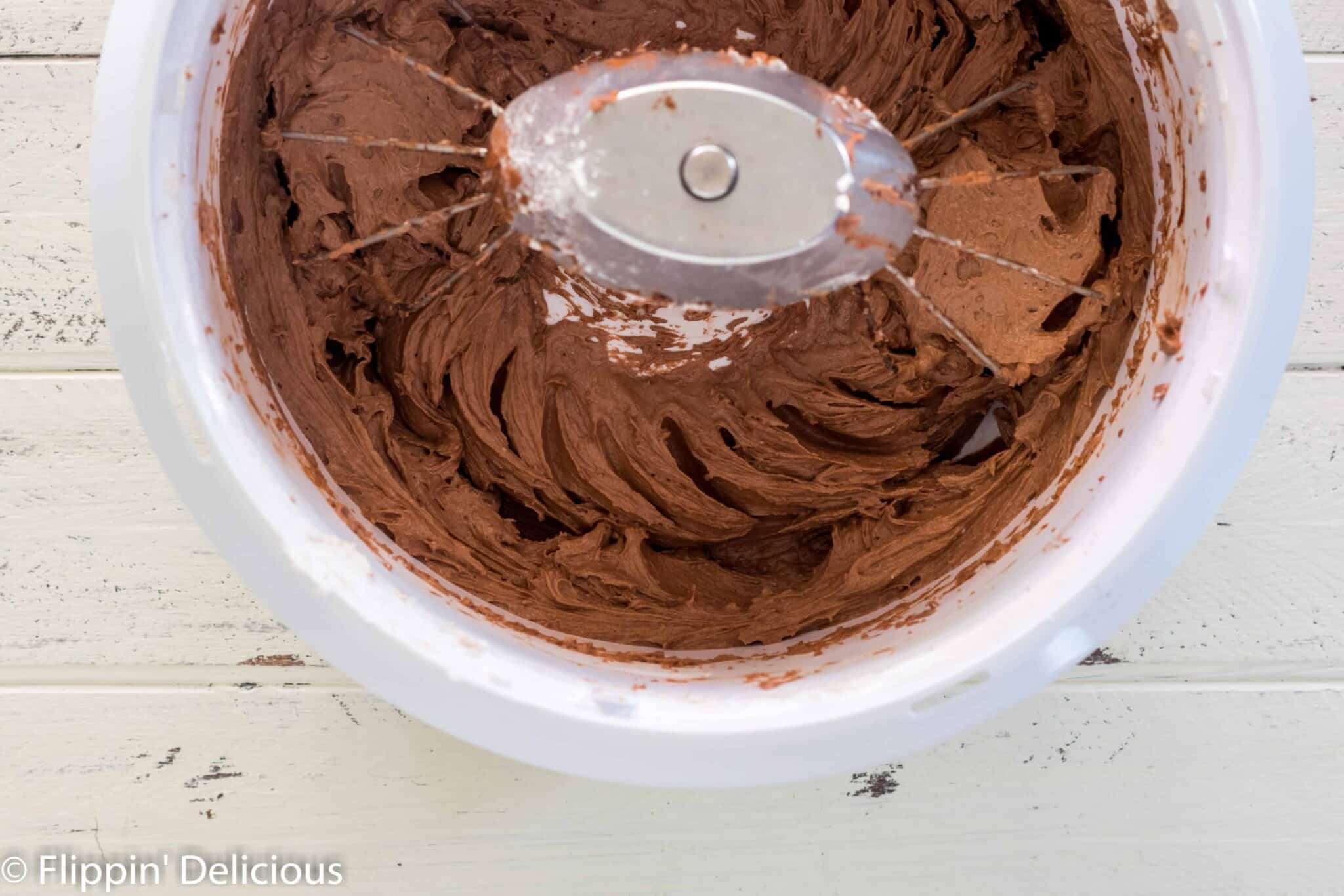 I used my Nutrimill Artiste, and it whips the shortening in butter in about half the time since it has such a strong motor.

The times given are for a hand held mixer, or traditional stand mixer with a overhead motor (the beater swings down into the bowl.) I've tested these times for years in my Bosch Compact, and with my KitchenAid Handheld mixer. They all do a great job! The timing is just a little different.

Once you have your vegan frosting base, you can add chocolate (among other flavorings). 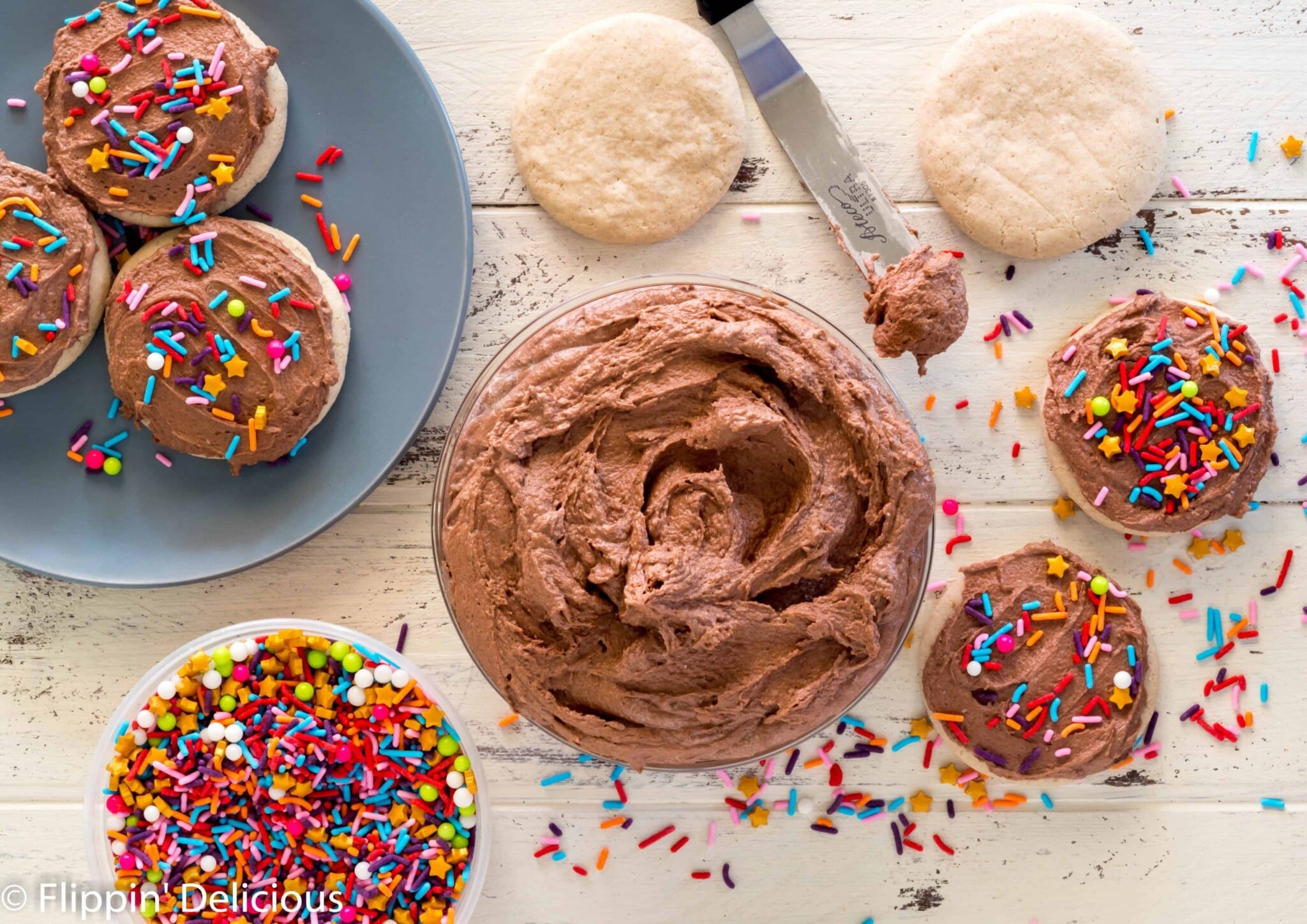 There are two ways to make your vegan frosting chocolate.

While both of chocolate options sound really simple, there are a few secrets to making a really chocolatey, rich, smooth vegan chocolate buttercream. 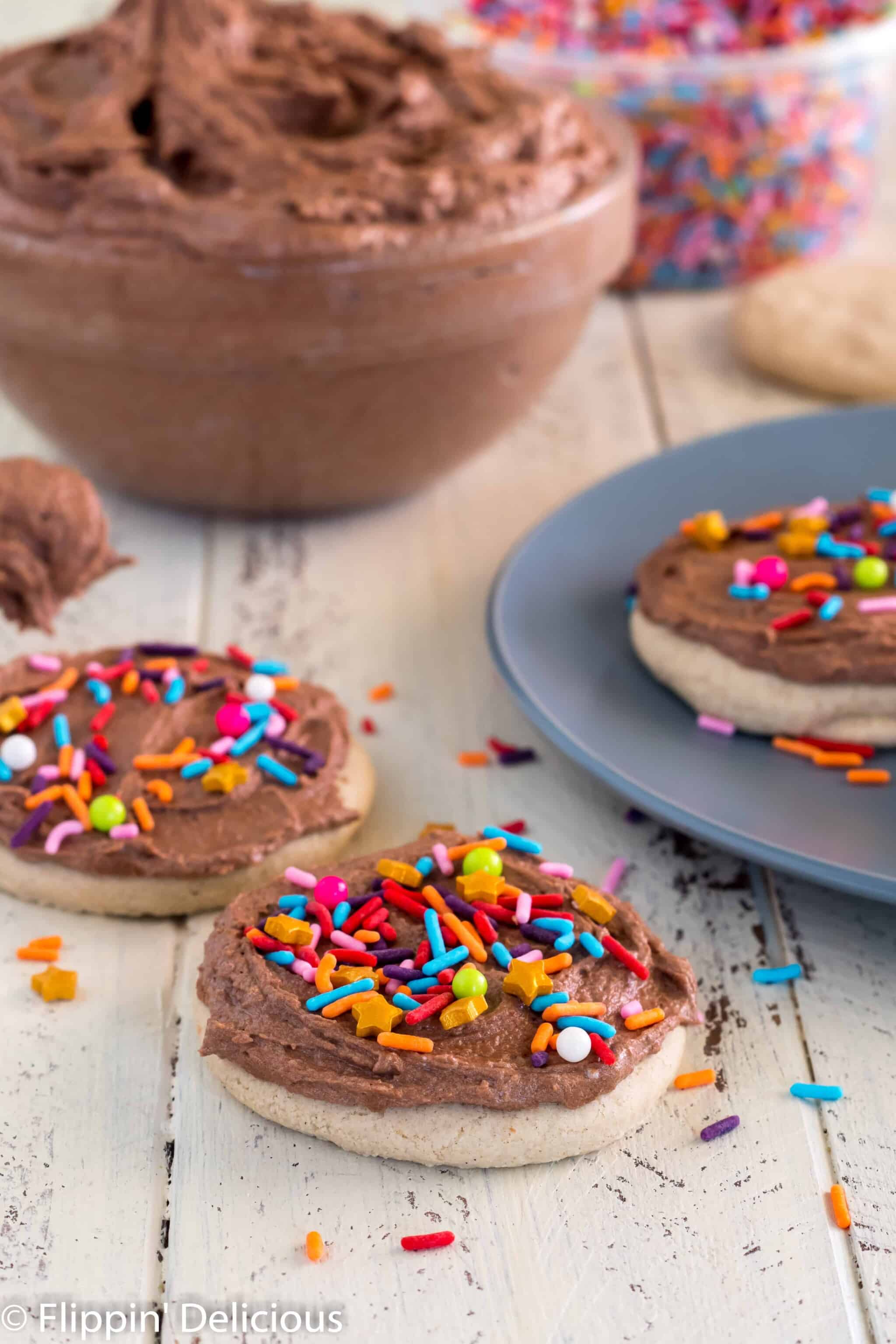 My chocolate vegan frosting is deceptively light because of all the air that I whipped into it. It was rich and full of chocolate flavor!

How to make vegan chocolate frosting with melted chocolate:

Adding melted chocolate to your frosting is the best way to create a dark, rich, creamy vegan chocolate frosting.

However, not everyone has access to a vegan, allergy friendly chocolate.

My favorite vegan chocolates to use in frosting are:

A microwave makes melting chocolate easy! Simply pour your vegan chocolate of choice into a microwave safe bowl and heat for 30 second increments until it is melted.

If you don't have a microwave you can melt your chocolate in a double boiler.

If you don't have a double boiler, you can place a heat-safe bowl over a saucepan with boiling water and heat while stirring until melted.

Let your chocolate cool to body temperature before adding to your frosting. When you touch the melted chocolate with your fingertip, it should feel not hot or cool, but about the same temperature of your skin. Just barely warm.

How to make vegan chocolate frosting with cocoa powder:

Cocoa powder may seem like the easiest way to make chocolate frosting. But if you've ever just added cocoa powder to your favorite frosting, you know that more often than not, it falls flat.

When I'm adding cocoa powder to vegan buttercream, I like to make a paste with cocoa powder and hot water , and then let it cool to room temperature.

All you need is equal parts of cocoa powder and hot water.

To boost the flavor even more, use hot coffee or hot espresso instead of hot water.

The hot water heats up the cocoa butter, and enhances the chocolate flavors (just like when you brew up cup of coffee or tea). The hot water somehow makes the cocoa powder taste more chocolatey!

Using a dutch processed cocoa powder will also give you a better chocolate flavor. Regular baking cocoa is very acidic. A dutch cocoa, or dark cocoa powder will have a much better taste. I usually use Rodelle's Gourmet Baking Cocoa.

Making the paste with cocoa powder also helps it get evenly incorporated into your chocolate frosting, and gives you a chance to break up any cocoa powder lumps so your frosting is smooth and creamy.

Be sure to let the cocoa powder paste to cool to room temperature before beating it into your vegan frosting. If it doesn't cool, it will melt your palm shortening and vegan butter.

What to frosting with vegan chocolate frosting?

I've frosted everything from gluten free vegan sugar cookies, to cupcakes and brownies with this fluffy chocolate vegan frosting! You can add it anywhere you want. 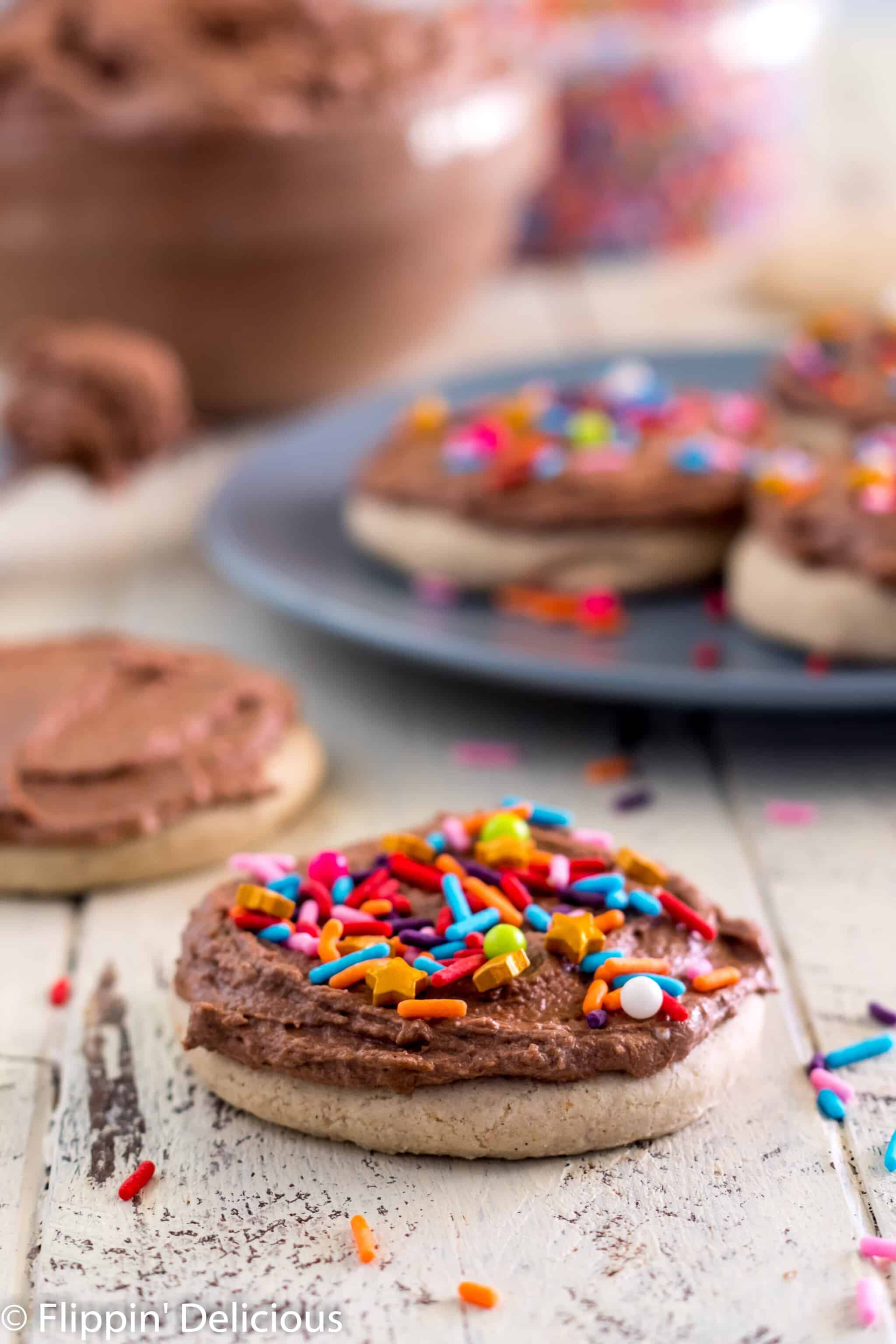 You can easily half this recipe, or even make only a quarter batch.

Be sure to follow the times for whipping the frosting. If you don't whip it long enough, it won't be fluffy.